A Barn With a View 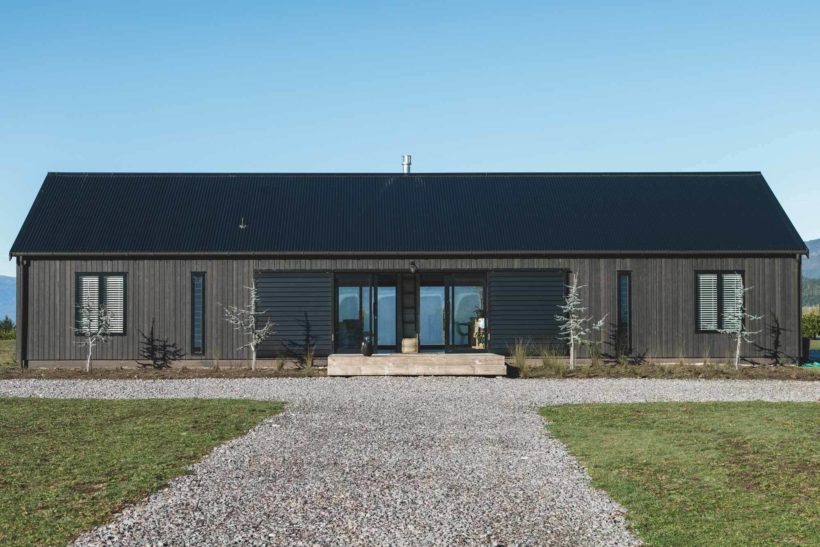 From a barren lakeside section to a charming barn-style holiday home in just one hundred days, Kiwi couple, Hamish and Anita Dodd, have set a new benchmark on the standard of home that can be beautifully crafted on shoestring budget and an ambitious timeframe.

It’s a tough act to follow, one hundred days. But that’s all it took from start to finish for Hamish Dodd and his wife, Anita, to transform a small piece of land in Kuratau, situated on the western shores of Lake Taupo, into a homely-meets-chic-barn style holiday home.

Not one to do things by halves, Hamish, a landscape architect and spatial design specialist (who doubles as a weekend radio host and TV presenter), was on a mission to create a homely Kiwi family bach (holiday home) on a timeframe and budget that most would think impossible. But defying all odds, even in the depths of one of Taupo’s harshest winters, he managed to pull it off. And perhaps even exceed any expectations of what could be done given the (self imposed) deadlines.

The first thing to be seen when you enter the sunny property along the stony driveway is the beautifully symmetrical building using Abodo vertical shiplap cladding in Vulcan, stained in a light warm black. Complete with matching modern sliding barn doors and a generously sized front lawn, which hosts an interesting sculpture come wind turbine and twelve solar panels, the home, although only one year old, has instant charm.

Comprising only one level, the house affords maximum contact with the landscape and sweeping lake vistas across to Taupo’s eastern shores.

Wild rabbits (that Hamish says have taken a fond liking to his newly planted garden) hop in and out of the property as if it is their own and pot-belly pigs wildly roam the neighbouring section. Thankfully, it didn’t take long for her to relent. “When Anita came for her first holiday down here with me, she just went wow!” beams Hamish. “She had no idea what to expect, because, being from Nelson, the thought of going to a lake was just wrong when you’ve got all those beautiful beaches. For her lakes are cold and full of eels!”.

Anita’s first amazing impression of Lake Taupo and subsequent appreciation of the stunning beauty of New Zealand’s North Island resulted in it being her to be the one to suggest that the two should get their own slice of paradise in the area.

“So we drove around lots of sections, talked about it and faffed about for a whole year. Then we just did it. We bought a piece of land and the first summer we just parked our car down here with friends. It was thoroughly enjoyable. Now it’s a home!” .

One hundred days of hard slog, cold nights and many a sleepless night later, their Taupo dream came to fruition as New Zealand’s first “100 Day Bach” – a popular local television series that documented Hamish’s journey through the rapid build. 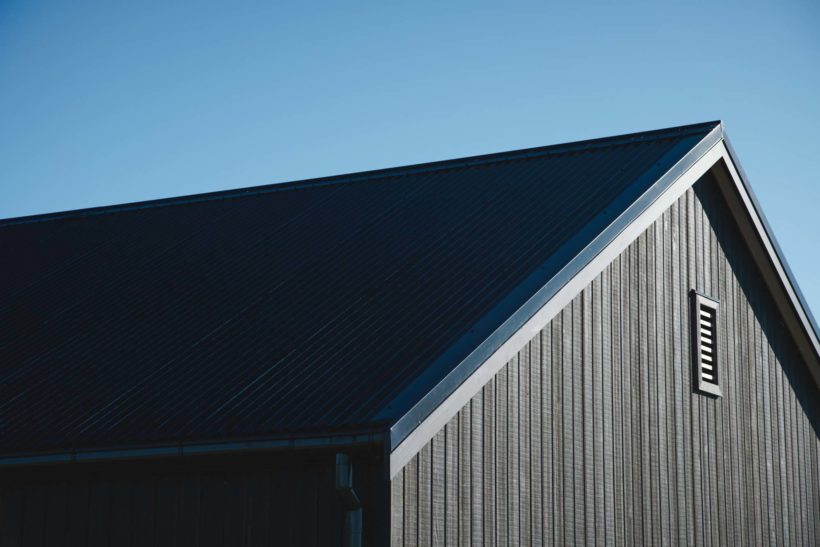 Framed by trees and native tussocks, the homely barn’s front entrance doubles as a generous deck that captures all of the morning sun. Drenched in sunlight, even during the cold winter months, the deck is the spot of choice for the daily morning coffee for Hamish and Anita and their many visiting friends and family. “It’s perfect”, says Hamish as he sips on his morning coffee. “We just like to take the bean bags out here with our coffee, read the paper and veg out”.

It’s clear he is in his element. Stepping through the sliding barn doors, which Adrienne, Hamish’s mother and now business partner, first spotted when Hamish was in the early stages of the project planning, you are immediately enveloped by a sense of homeliness and rustic charm. The home’s living space is divided down the middle by a two-sided gas fireplace which serves both as a cosy key design feature and as heating for the entire home. “We weren’t allowed to have a real fire inside – our section wasn’t big enough” recalls Hamish.

Although he was disappointed at first since his dream of having an old school chimney to complete the barn look couldn’t be fulfilled, now he says he’s thankful since he made sure the whole house benefits from the gas version. “The fire’s got a big ducting system that runs through the interior and throughout all the bedrooms. You almost cook! Plus now I don’t have to split wood and clean the thing all the time”. 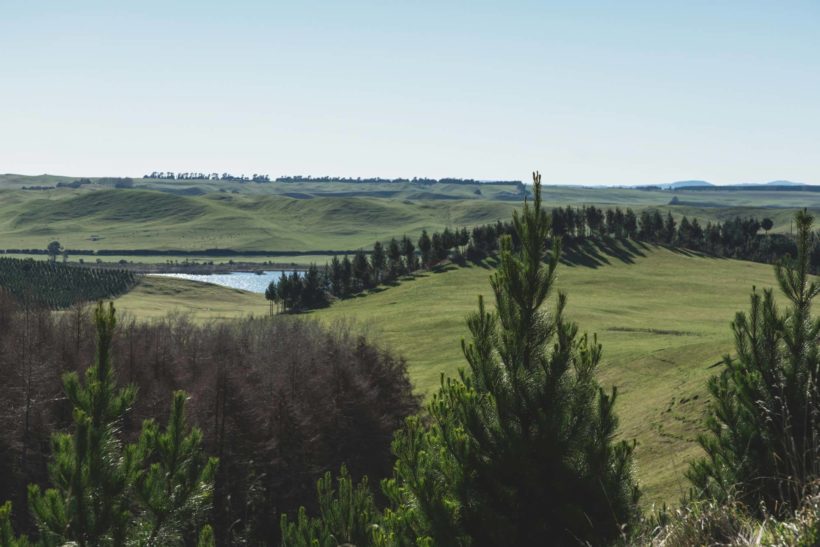 To the right of the fire and main entrance lies a spacious kitchen and dining area that literally drinks up the sunlight, making it an instant magnet for people gathering. Perhaps one of the space’s most endearing features is the generous timber kitchen island countertop, complete with storage space and a series of drawers made from recycled Indian Pine, specifically designed to match the rest of the wooden kitchen cupboards and adjoining solid wood dining table.

The kitchen’s bench tops (including the island), made from a beautiful solid bluestone, and splash-back intricately laid with small white tiles are equally as dazzling. “We designed the whole living space to be bigger – to be communal. So people would sit around the table and eat breakfast and dinner and play board games and stuff like that”.

The lounge, situated to the left of the fireplace, was designed with another important thing in mind. Comfort. Slouchy beanbags and ottomans ideal for kids and adults alike, are found scattered between the two retro style couches and chairs that used to be Hamish’s in a past life. With the thumbs up from Hamish and Anita, Adrienne, an interior designer, reupholstered them with contemporary warm “bachy feel” fabric tones and designs. “We tried to utilise things that Hamish already owned” she says. “We didn’t want it to be junky but we did want to reuse things that we already had. That’s part of what a bach is all about. It’s part of the charm, part of being in a holiday house”.

To contrast the holiday home’s cozy décor and fittings, Hamish opted for industrial feel concrete floors throughout the home’s living and kitchen areas which, despite the need for warmth and insulation over Taupo’s chilly winter months, worked out well. With the help of his father, who came down from Auckland to help, Hamish sealed the concrete himself with concrete wax as soon as it had been poured and hardened. “Some of the locals thought I was mad, but it worked out perfectly. By the end of the day after the sun’s been hitting the concrete all day, it’s like a hot house. At 10.30pm if you walk on the floor, it’s hot!” 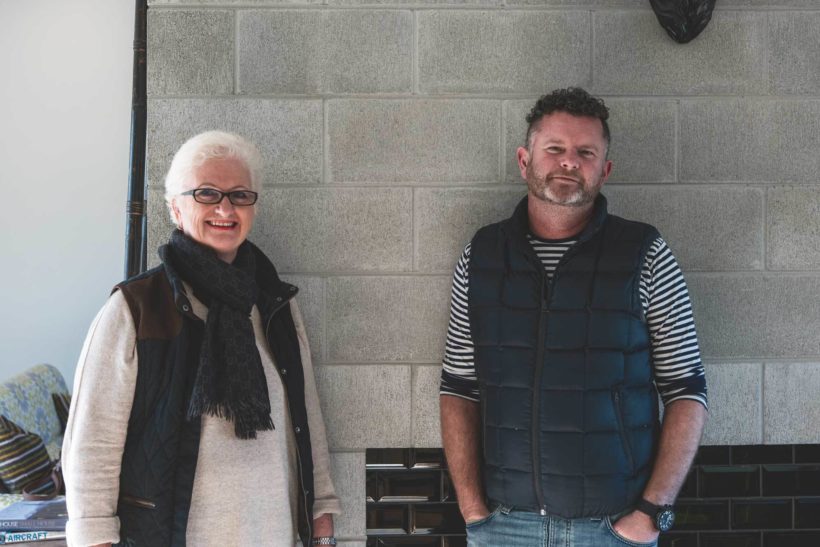 Charming – inside and out

In keeping with the holiday home’s communal, relaxing theme, the kitchen and living area opens out onto a stylish concreted patio area complete with an outdoor wood burning fire – perfect for summer entertaining. Over the summer when the sun is lower in the sky, the area is flooded with light and heat. “I use the outdoor fire all the time. I’ve already burnt through my last stash of firewood. Even if we are all inside I just love it going. I like to look out at it burning away. I love the process of it”.

The holiday home’s three bedrooms situated at either end of the house, are kept snug thanks to the fire’s warm heating ducts that extend into the sleeping quarters and each room catches a differing and picturesque glimpse of the lake. “From Anita’s side of the bed she can look out the windows out past the cherry trees and onto the mountains. When they’re covered in snow it’s pretty magical. I get a little buzz every time I look out the window”.

True to the home’s warm and woody barn feel, the main bathroom features interesting timber themed floor tiles – normal tiles printed to look like real timber – and an array of retro wall tiles. “I never got into them before, but now I love them and think everyone should get into them” enthuses Hamish. “They give it a bach feel. What I’ll love even more is the day they date and people think we committed a terrible design crime. Because then in another twenty years’ time they will come back around and be retro again. If I’m lucky my grandkids will think grandpa’s bathroom is pretty cool”. 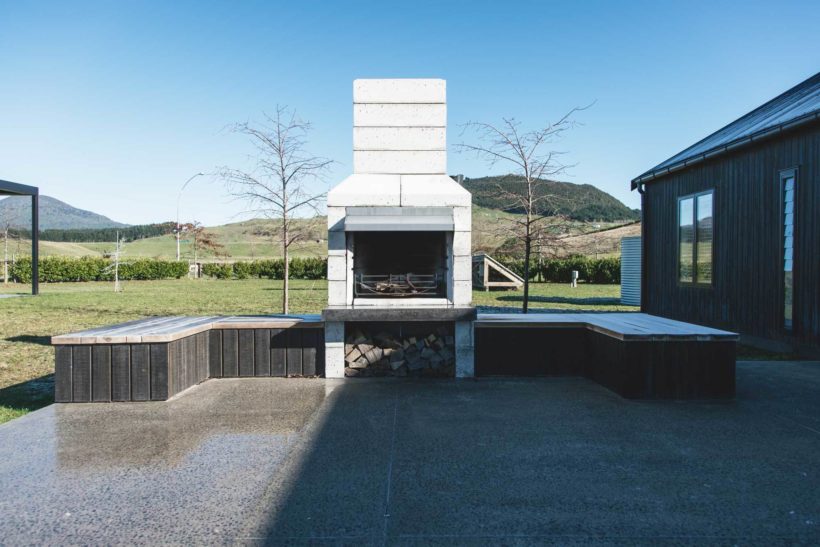 The wonders of wood

It’s clear that Hamish is as excited about the process and finished results of the rustic holiday home as he was setting the insanely short timeframe for building it. “There are lots of things I enjoyed about the build, cladding being one of them. Finding something that was going to be different in the process. With something simple like this, because it really is just a rectangular box, we really needed a good-looking cladding of a certain caliber on the outside. Something that could match the home’s whole look”.

Hamish also says Abodo’s Vulcan VG Cladding has handled the heat of Taupo’s hot summer remarkably well – especially with four coats of black paint to give the home a dark brown finish. “It handled the summer no dramas at all. Because it was black everyone has asked me. But there’s not even a single crack”.

One year on, with the home finished and the garden not far behind, Hamish and Anita are able to sit back and enjoy the fruits of their labour, doing what they love to do best. Relax. “We come down here, we relax, we chill out. In summer we swim all the time. We just drive down to the beach and park up for the morning, we go for walks. The kids like to ride their bikes around, we go water skiing”.

His mum Adrienne agrees. “I come down here as often as I can. I even come down by myself. It’s just a lovely place to sit and read. It’s as lovely in the winter as it is in summer really. And it’s such a thriving little place. I am really content just being down here”.

Not just mother and son, five years ago Hamish and Adrienne joined forces to become business partners in a home design business they run from a little studio they renovated in Auckland’s quaint Remuera shops. “For years we worked out of the same office and never did anything together, but we would always be overlapping with work” says Hamish. “She’d say I’m restyling this office and I’d end up helping with the more structural design side. I don’t like the window dressing stuff but Adrienne loves it.

Then one day we were sitting there and said we should just work together, it would just be easier”. While the combination of having a strong willed son and his mother working together in close confines might have seemed a little dubious at the time, the partnership has worked out beautifully. “Its nice working with her. She gets on well with Anita too, so it’s been nice for them for them to potter and do their bits” says Hamish. Adrienne agrees. “We’ve sort of got our own role and tasks that we have within the business. We know how each other works and thinks. I push his buttons, he pushes mine. I think we are a good balance” laughs Adrienne. “We’ve got a little family affair – it’s really nice”.

Project Revisit: four years on, how has the Vulcan VG Cladding in Ebony stood up to the harsh climate? Hamish explains... 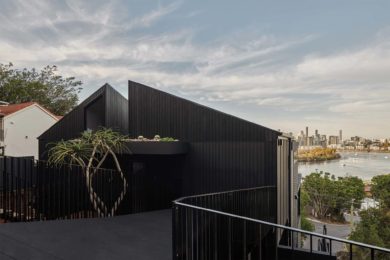 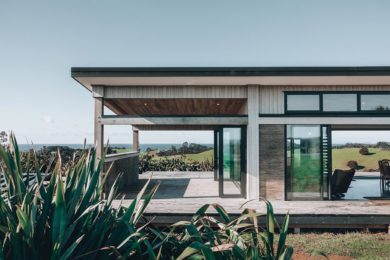 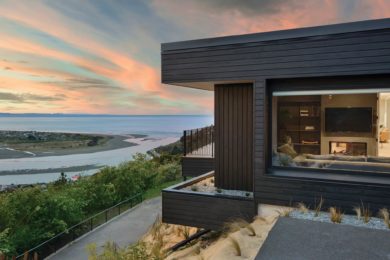 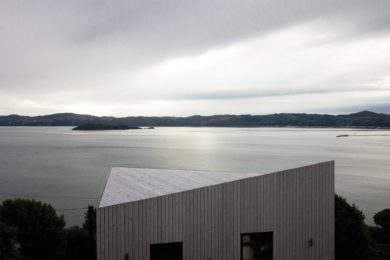